The Other Wild Food

This (past) weekend we hosted an English Shakespearean acting troupe which inspired me to write on hunting.

These were young city-folk who were hosted by families in The County. I try to go over the top being a good host and trot out, among other country toys, my hunting bow. The modern hunting bow is about as similar to the English long bow as a Cuisinart is to a butcher’s knife. 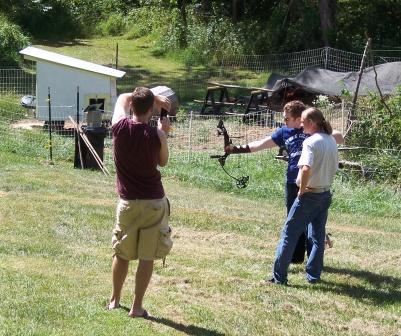 Tim & Tom, our guests, described the act of shooting an arrow as “incredibly satisfying.” There’s a whole ritual of donning arm protection, then putting on a device for releasing the arrow, gripping the bow, drawing back on the string, sighting, breathing, and finally the release. (The book Zen and the Art of Archery is a great read.) With this modern bow and minimal training, these novices were quickly releasing killing shots.

Killing shots. When I first became involved with archery, modern “compound” bows with complicated-looking pulleys were just reaching the market. They were expensive and I was just a kid. My brother and I did share a variety of simple “recurve” bows bought by our parents, but neither of us did any hunting with them. I logged enough hours at archery as a boy that when I resumed 30 years later I still carry tangible muscle memory. The hunting bow I bought last year shoots arrows faster, more quietly, and more accurately than the bows I used as a boy. I also bought a practice target able to stand up to more abuse than hay bales; it has a series of bulls-eyes on one side and a schematic of a deer’s vital organs on another. I had no luck last year bow hunting, but this year, with more experience, I hope for at least one killing shot.

Hunting involves killing, just like raising chickens or cattle or pigs. Each deer I kill provides about 40 pounds of hormone free, chemical free, and cage free meat. (With all the money I’ve spent on equipment and licenses, it is certainly not free-free.)

I hunt not only for meat, but also for sport and environmental reasons. I won’t deny that the 10 point buck coming off the hill each night doesn’t have me excited. Also, the relatively large deer population harms other species of animals and plants. Heck, deer-auto accidents are hurting humans. I could into lengthy detail about reasons for hunting, but I hate preaching.

The point of this post is to introduce hunting as a dimension of being a sustainable locavore. I want to live in a world that balances the requirements of mankind with the natural world around. In that world, hunting has a place.