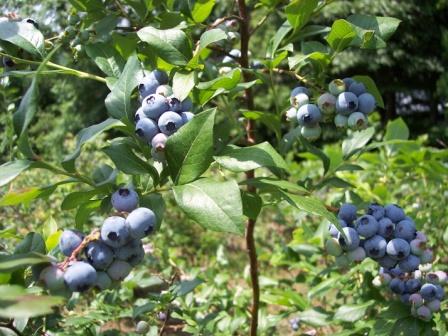 There is no question that we are well into berry season.

Strawberries are the first berries to ripen for us here in the Northern Virginia Piedmont. The most common ones that you are likely to grow or buy are the June bearers. They produce a big flush over a few weeks in  late May or June, and then they are done until next year. Day neutral cultivars like ‘Tristar’ or Alpine strawberries produce a little bit all summer long. I pick about a quart of strawberries every week from my ‘Tristar’ patch and that works well for us.

I have just cleaned out my white and red currant bushes. They make the easiest jelly since they have so much pectin, and one of the tastiest and prettiest too, a gorgeous brilliant clear red… that is, if you don’t press the jelly bag while it’s dripping. This year, I exercised great restraint and did not squeeze the jelly bag! But I was not going to waste so much pulp, so I processed the left over berries through the food mill’s finest plate. The strained currant pulp was mixed with sugar and black cherries to make a currant/black cherry jam. Cherries are low in pectin so the jam can be a little tricky to set sometimes…. but not if you use currant as the base for the jam! And the tartness of the currant is very pleasant.

I don’t grow gooseberries  but I am told by friends who do that they are ripening now. Well… I do have one small shrub, and last year I turned the few berries it produce into a charming little pink lemonade. But the shrub and I are not really well acquainted yet… I still have a lot to learn about gooseberries. They may be an acquired taste…

We are in the middle of blueberry season.  And what a glorious season it is!  As all other fruit so far they started a little earlier than usual too. We eat them raw, but since cultivated blueberries can taste a little flat, I like to mix them with other berries for berry salads. They also ake excellent ice-creams and sherbets – try it with a Reine De Saba (almond and chocolate cake).

Or layer it with angel food cake for a very pretty ice-cream sandwich cake that can be made way ahead of time. And just before serving, a fresh barely cooked blueberry sauce.

Of course, a few pots of jam – what’s not to like about blueberry jam? and the rest in the freezer.

Blueberries truly are a cinch to freeze: no pitting needed, no freezing on cookie sheets so that the individual fruit don’t clump together, no sir, you just plop them in a bag or or other freezer safe container, and they’ll be there waiting for you when you need them for your waffles,  pancakes, cobblers, cake, sauce or smoothies. Since I am such a lazy baker (although I do make this cake replacing the cherries with blueberries – picture below), smoothies is my favorite way to use them, still frozen,  mixed with yogurt and a dash of honey or maple syrup; sometimes with a few pieces of canned peaches or a very ripe banana. 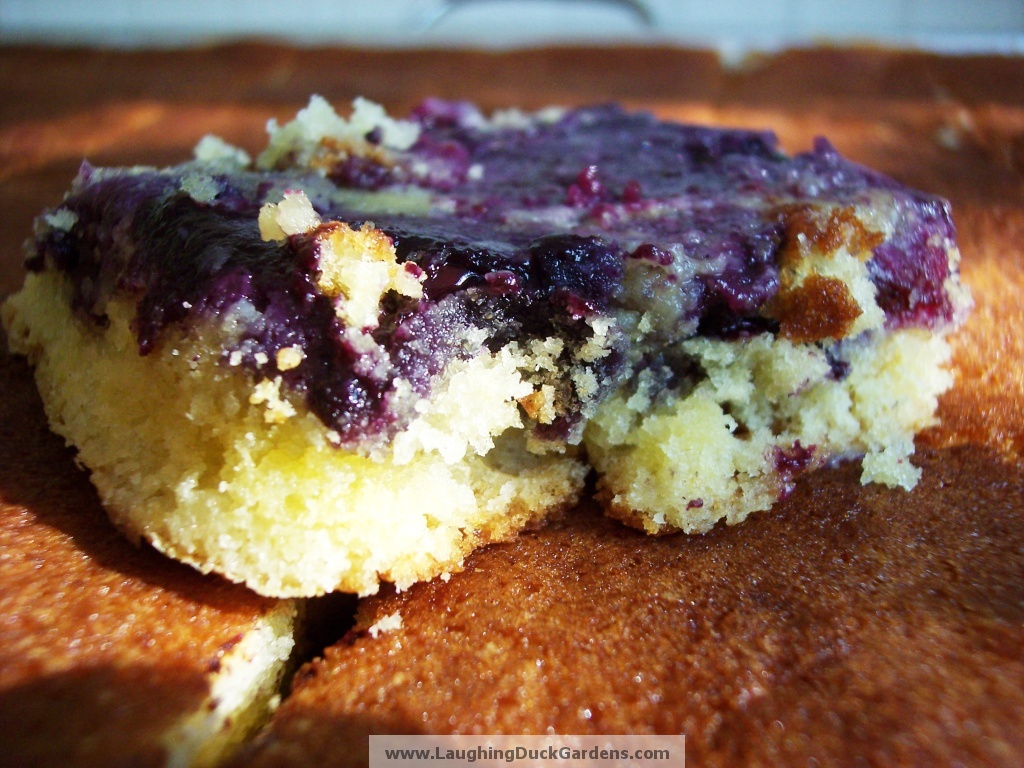 Since the season should last a few more weeks (but not too many… unfortunately), I plan to go pick some more at Kim Dean’s small pick-your-own berry patch. Small is a relative term since he has several hundred of shrubs… For those of you in the Northern Virginia Piedmont, End of Road Bramble Farm is located at 853 Scrabble Road, Castleton, VA. This is a one-man operations (and the one man has an off-the-farm job), so do call at least 24 hours ahead to make sure he is going to be there. 540-937-4371. If you are focused, you ought to be able to pick at least 6 pounds an hour (that’s about 1 gallon). Picking blueberry can be very zen like actually… and then it’s hard to stop, because there is one more, and one more and…

What else? It’s the tail end of mulberry season for some trees which started to fruit in early June – at least in the southern part of the county … but here on my road, I just spotted a young tree whose fruit are just turning black. But if you have a tree, or know someone who does, mulberries are worth checking out. Taste them first though, before you commit the time to pick and stain your fingers and clothing purple: not all trees produce berries worth picking. Some are truly delicious and some are… ho-hum. But if they are good, they are good! They’ll be plenty for the birds, so help yourself.

The wild black raspberries are fruiting now. They are not very common, the plant is a little delicate when compared to devilishly thorny black raspberries and a little shy too, easily overpowered by other plants. They aren’t as easy to spot when in bloom either.. which is how I scout the showy blackberries in May: note the clouds of snow-white flowers and come back in July. But the blackcap (an other name for black raspberries) is worth seeking. Don’t expect a very abundant harvest however… they are kind of shy fruiters too.

The wild (and cultivated) blackberries should start ripening in a few weeks – shortly followed by the wineberries. And then they are all kind of escapees from gardens that have naturalized and all kinds of other brambles of which I only know the name: marion berry, logan berry, thimble berry… a whole world of berries – cultivated and wild – is out there!

Grapes are forming nicely on the vine… I should not count my grapes before they are harvested – this would be the first year – but so far, they look just great. I know, a lot of creatures and fungi like grapes so harvest is far from a sure thing.. but still… there is this thing called anticipation.  And then in August we can start harvesting elderberries and in October the Autumn berries.

So.. to a fruitful berry harvest!