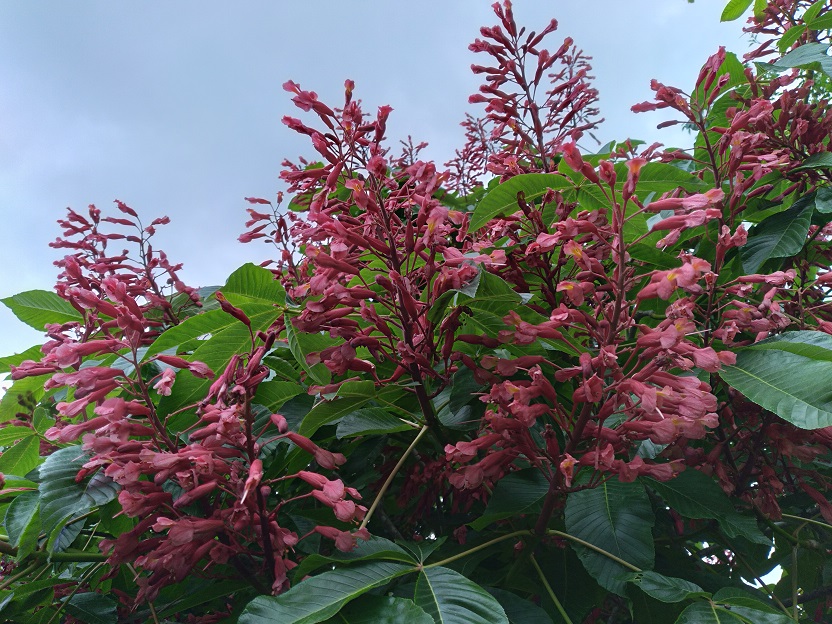 Friday morning May 13 several Friends of Goat Hill gathered to work on the Goat Hill berry bramble patch – weeding, mulching, and pruning away dead canes that escaped our attention back in February when we held our big pruning days. Now that plants are in full growth, we are trying to have 2 mornings a week to gather and maintain (and enjoy friendly chats with our hands dirty). Whomever of the Friends can come, come and work for as long as their schedule permits. Some of us are gardeners, and some of us just love berries (and of course some of us are both!) – we are all looking forward to weeks of berry picking and the prospect of sun-ripened berries for eating fresh, as well as freezing and jamming for later use.

The early blackberries are blossoming, and the later ones are in buds. Unfortunately, one row was pruned too aggressively this past winter, so production from that row will be limited. That what a lesson for me: when showing someone how to prune, it is imperative to come back and make sure they indeed understand. In late winter, to an untrained eye, live canes and dead canes look strikingly similar. It’s the teachers’ responsibility to understand where their student stand on the learning curve. But still, especially if we can water, we should have good picking.

There are all kinds of pollinators at Goat Hill thanks to the varied and abundant plantings. Additionally, a hive of honeybees was returned to its summer quarters in the garden a few weeks ago. And so, many pollinators ensure an abundance of fruit & berries. Weather and sufficient water (rain or watering) are other factors.

The flowering buds are also coming along on the black raspberries, as well as well as some of the red raspberries – but are not yet open. Without knowing the cultivars, it was impossible to prune the red raspberries correctly last winter, so we prune the canes half ways… Now we can see unproductive canes, and cut them down. Some raspberries (such as ‘Prelude’ and ‘Latham’) bear fruit in late spring on canes grown the prior year; others (such as ‘Autumn Bliss’) are late summer/fall fruiting, i.e. they fruit on wood that grew in the current year; and some (such as or ‘Heritage’) can go either way, depending on how they are pruned… and the local climatic conditions.

John has been mowing the grass beds between the berry rows, and so it all looks very inviting, and full of promises. Maybe 4 weeks to the first blackberries?

So here are a few pictures of the bramble patch.

On other news, the Siberian irises are starting to bloom – they will be glorious. The hostas are a joy to see: a tapestry of greens, blues, blue-greens, chartreuse, and a symphony of leaf shapes under the Kousa dogwood. The native tradescantia is blooming in many shades of blues & in white, some in masse (the original plantings) and some in single flowers here and there, having seeded themselves in many parts of the garden… The baptisias, so graceful and delicate, are sending up their tall spays of butterfly-like flowers that are very attractive to bumble bees; soon whole beds of them will be riots of yellows or blue, each bed planted with a single color a la Monet. And the red buckeyes! The flowers produce lots of nectars so are a magnet for hummingbirds and many bees. At least I think it’s they are buckeyes; John says they are Chinese chestnuts. Anyhow, they are in the Aesculus genus (buckeye, horse chestnut) not in the Castanea genus (true chestnuts).

In the container garden, Connor & I have most our tubs & pots planted. Connor has beets carrots, onions, radishes, leeks, potatoes, strawberries – more to come soon. Sylvie has beets, radishes (most of them harvested already), spigariello, calendula, radishes, mint, onions, early potatoes, fennel, parsley, eggplants, & peppers – also more to come soon (to include small tomatoes, and carrots, and maybe tomatillos). Colleen and her student crew has done the first weeding but not yet planted their tubs.

In the vegetable/flower garden, Joneve is planning to be planting her beds over the next 2 weeks with a variety of dye plants, to include Hopi Black Dye sunflower, amaranths, coreopsis, and indigo. Dori can expect to start harvesting strawberries this week-end… if the birds don’t eat them all. I saw a few fruit with what I think are bird damages. And I observed some extremely suspicious behaviors from what might be catbirds or mockingbirds. I was hoping that rabbits were the culprits and we could protect the bed with chicken wire enclosure, but this may have to be rethought.

Lots of birds are flying around and singing – this is mating season after all. I love the buzz of hummingbirds, and the undulating flight of goldfinches – startlingly bright yellow flashes as the males go about their business. I stepped on the black snake that was sunning herself (himself?) in the path, right next to a black hose. I startled her as much as (if not more than) I startled myself. She rapidly and quietly slithered away under the chives, while my heat rate calmed down.

So Friends of Goat Hill, see you Tuesday morning if you can for more berry care. If we have enough hands, we could sprinkle 10-10-10 fertilizer to fortify plant as well, as John recommends. No matter, be sure to walk around the gardens, breathe in some of the May magic, and capture some of the beauty there with your camera. May is fleeting.

Searching is in progress