The Bees in Winter 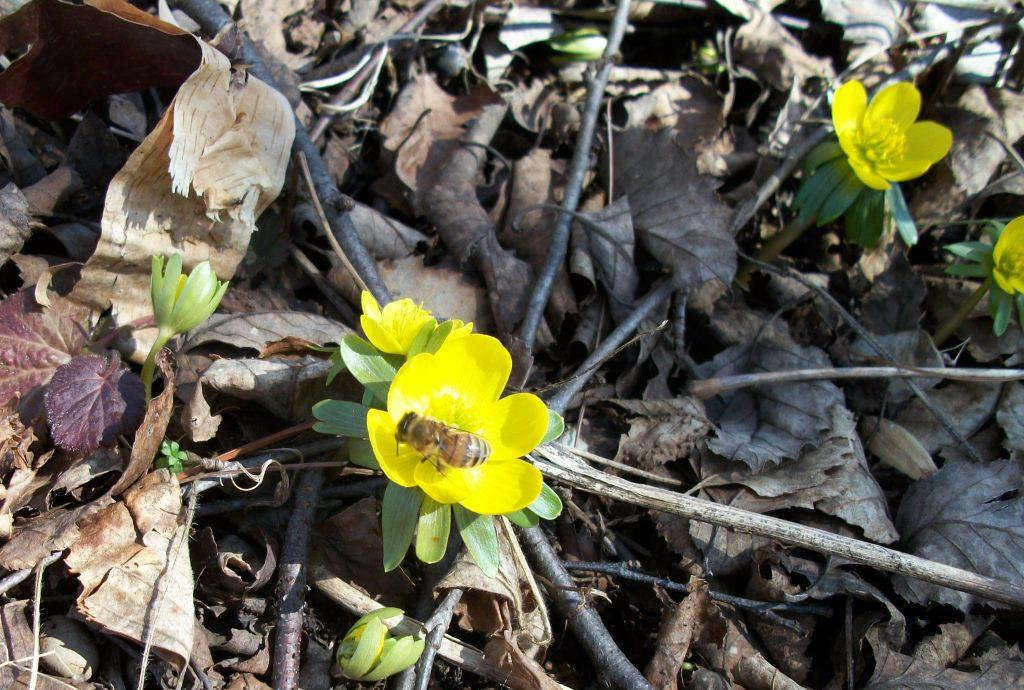 It’s been a hard winter for the bees. Harder than usual. We have lost 1 of our 3 colonies and it’ll be a few more weeks at best till we see reliably clement temperatures and blossoms for them. How can we help them?

Winter has been consistently cold, with maybe 2 or 3 warmish breaks which lasted only a few days each, immediately followed by a huge drop in the temperature – as much as 50 degrees (22C)  in 24 h.We have seen several nights at or below zero Fahrenheit this winter (-18C) and many below 10F (-12C). On several days – like today – the high was only 20 F (-7C). In fact, today (as several times this winter), it’s warmer in Anchorage, Alaska.

By comparison, the winter of 2012/2013 was fairly mild – the daily temperatures were consistently moderate, there were no big swing and we never reached down to 10F (-12C). We had a few snow falls, but it all melted fast. The winter before was weird: very windy, dry, moderate temperatures, and the only snow we had fell well outside winter (October 30, 2011 and April 7, 2012). In both prior years, I had already planted my fava beans and peas outside. Not.this.year.

Last year the snowdrop were fully opened on January 28. This year, they are mostly open on February 23. A week later, they are buried under 6 inches of very fine snow. Beautiful fine powdery snow in fact, but snow nonetheless.

Last year, on March 3, the first daffodils were opening and the hellebores were blooming. This year? I have not even seen a crocus yet and the winter aconites only have a few flowers open.

Ornamental flowers like that provide negligible amount of food for the bees, but they are a harbinger of other things blooming. It’s trees that provide bees with the majority of their forage in the spring — at least for us.  There maybe ten of thousands of blossoms on a large tree, and since a bees goes out to collect one kind of nectar or pollen, a tree is much worthier than a clump of crocuses. One of the earliest source of food, the maples, aren’t blooming yet. Their buds have started to swell a little, but no blossoms yet. When they do, the small red blossoms appear as a red cloud from a afar.

With this kind of arctic weather (and arctic is correct since we were visited by a few “polar vortexes” this year) Keith has been trying to protect the remaining colonies from the extreme cold and the worst of the winds.

Initially, he used tomato cages, stuffed with straw and wrapped up in light fleece to hold the straw.  Only on 3 sides, since it’s important that the hive breathes: condensation in this kind of weather would be lethal to the bees.

Now he is trying something that’s a little easier to put on and take off fast, water-proof, and visually more elegant. In fact, it’s hardly noticeable!

It’s a little bit high tech too: a corset of insulating foil (really bubble wrap with reflecting foil on one side and white plastic on the other) tied by bungees straps & cords (the front side of the hive remains open). For additional insulating power, he slid sheets of polystyrene between the wrap and the hive. All materials were left from a construction project. The insulating bubble wrap foil has been doing wonder in the greenhouse in helping to maintain warmth in – let’s hope it helps our bees until warmer weather arrives.

Searching is in progress